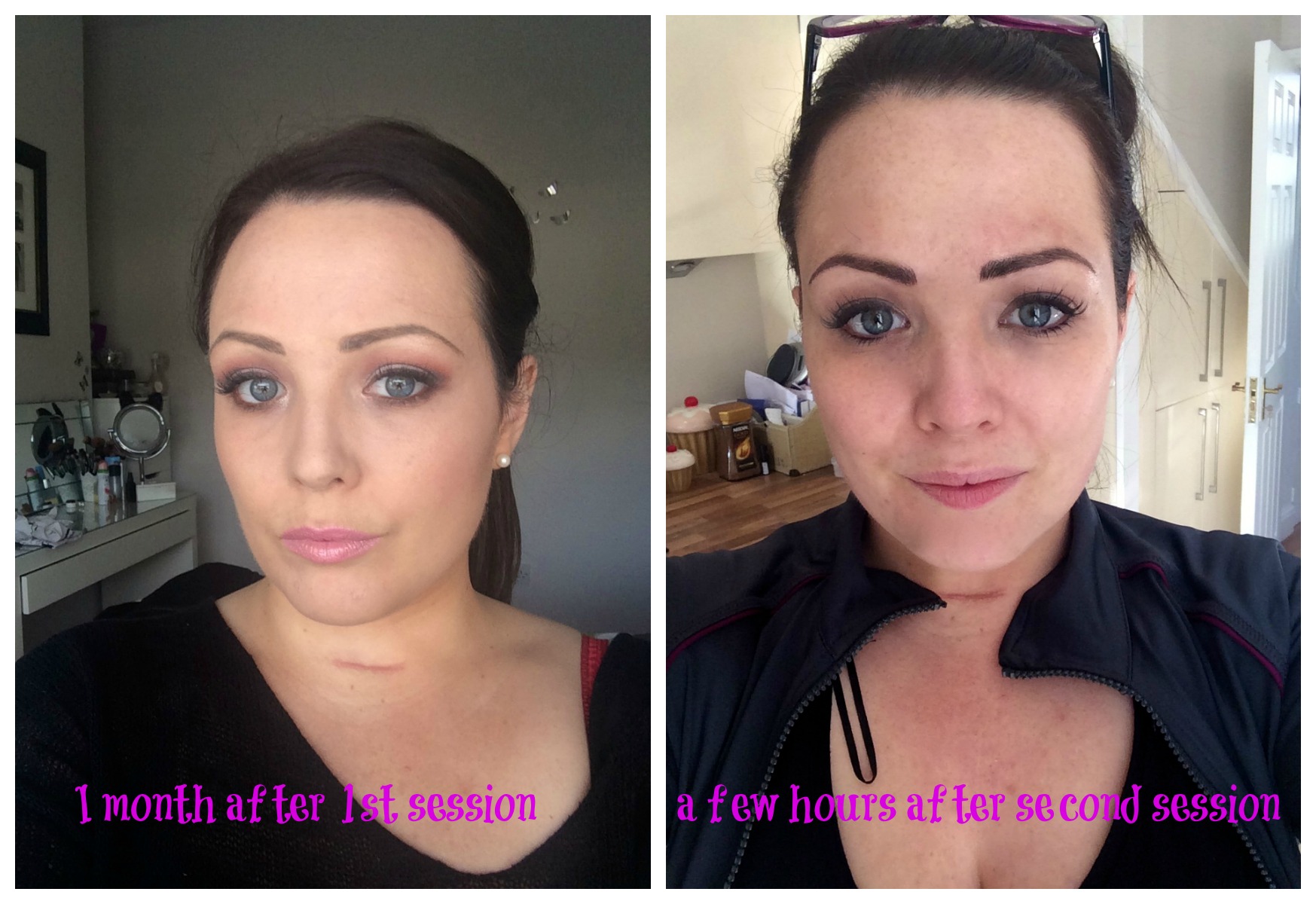 When I was in school it was the fashion to shave off your eyebrows and then pencil them back in. I remember the horror as a first year, looking at the 6th years with their terrifying eyebrows. I mean 6th years were scary enough, but their eyebrows wouldn’t be out of place on a Disney villain. Thank god I was far too afraid of my mother to take part in this trend, but I did still get far too carried away with a tweezers on more than one occasion.

Due to years of over plucking I was left with little or no brow and when the trend for bigger brows appeared I was left with no choice but to pencil mine in. Last year when I got sick, my brows went from bad to worse. Sometimes with thyroid patients, your hair and brows can thin out a little. I felt the end of my brows thinned out an awful lot and it was getting to the point that it was getting to me and I decide that it was about time I did something about it.

I did a lot of research on semi permanent brows and while there are a lot of different techniques out there, Embrowdery was the one for me.

There are a lot of salons out there that are claiming to do Embrowdery, or a similar technique, but it is Up to my Eyes in Greystones that brought this particular technique over from Japan and trademarked it in Ireland. Considering these brows were going to be something that I had for a long time, I wanted to go to the best in the business and all my research pointed to Up to my Eyes.

So what is embrowdery and how does it work?

Embrowdery is a form of semi permanent makeup up, that lasts for between 18-24 months, depending on the person. It uses a new type of technology that allows for the pigment to stay on the top layer of skin, unlike eyebrow tattoos which go to a deeper layer of the skin. It takes 3 sessions, 4 weeks apart to get the brows to the point were they will last 18-24 months. The first session is the longest of each session, and takes between 90-120 minutes. When you arrive you have a consultation with your technician and discuss the type of brows you would like. They then set about the task of drawing a brow shape on, that they think you will like and also that suits your face shape. This is all done with a brow pencil so that you can alter the shape, until you get to a shape that you are happy with. It is important to take the advice of the technician on board, as I had an idea of what shape I would like my brows to be and it turns out the idea I had was not the shape that suited me the best.

Once the shape is decided upon, the next step is making them more permanent. The technician uses a tool, that I thought looked a little like a fountain pen, to apply the pigment under the skin using teeny tiny stroke.They technician uses a serious of tiny strokes to create the appearance of a brow hair. These strokes are so fine, you really would have to be extremely close to tell that it isn’t your real brow.

I was afraid that the application of the pigment would hurt, but to be honest it was no worse than getting my brows plucked. In fact it actually hurt less. I found I was extremely relaxed as I lay there getting my brows done.

Once finished the technician explained the after care to me. I had to apply a cream, which was provided, every 2 -3 hours for the first 5 days and then once a day after that. This stops the brows scabbing over and stops the pigment coming out. It does sting a tiny bit for a few hours after application, but nothing that bothered me.

Your brows are darker when first applied, but this fades up. I was expecting to have to hide for a few days when I got my brows done, but there was no down time at all and I was good to go about my normal business. The brows do fade in-between the 1st and the 2nd session. Some people have more fade then others. My brows kept the pigment very well, but some people can have a lot of fade. Don’t panic is this happens, this is normal. It not only allows for changes to be made on the 2nd session if needed, but it also means that if you don’t want to go ahead with further sessions, the brows will fade completely after a few weeks. They are not semi permanent until the full 3 sessions are completed.

I have now finished all 3 session and I have never in my life been happier. I am over the moon with my brows. They are better than I could ever have hoped for. They take the hassle out of getting ready because I don’t have to do a tap to them. I can now get away without wearing makeup as I now have brows!

So now onto the bottom line. Cost. These beauties do not come cheap. The over all cost of these brows is €440, but this is broken down over the 3 sessions to make it a little more manageable. The first session costs €260, the second €120 and the final session is €60. While this is expensive, now that I have had the 3 sessions done, I can 100% say this was money well spent and I would spend it 5 times over to keep these brows, I love them that much. In about 18 months, I will pop back out to Up to my Eyes for a €60 top up and again they will last for another year or so. The way I see it was, HD brows cost about €40, which you get on average every 4 weeks, which works out at €480, so you are actually saving money with embrowdery.  You can read more about them here

I was nervous about getting embrowdery done, not only because of the cost, but also because of the permanency of them. Now I actually couldn’t be happier and often catch myself in the mirror and thank god I made the decision to get them done. 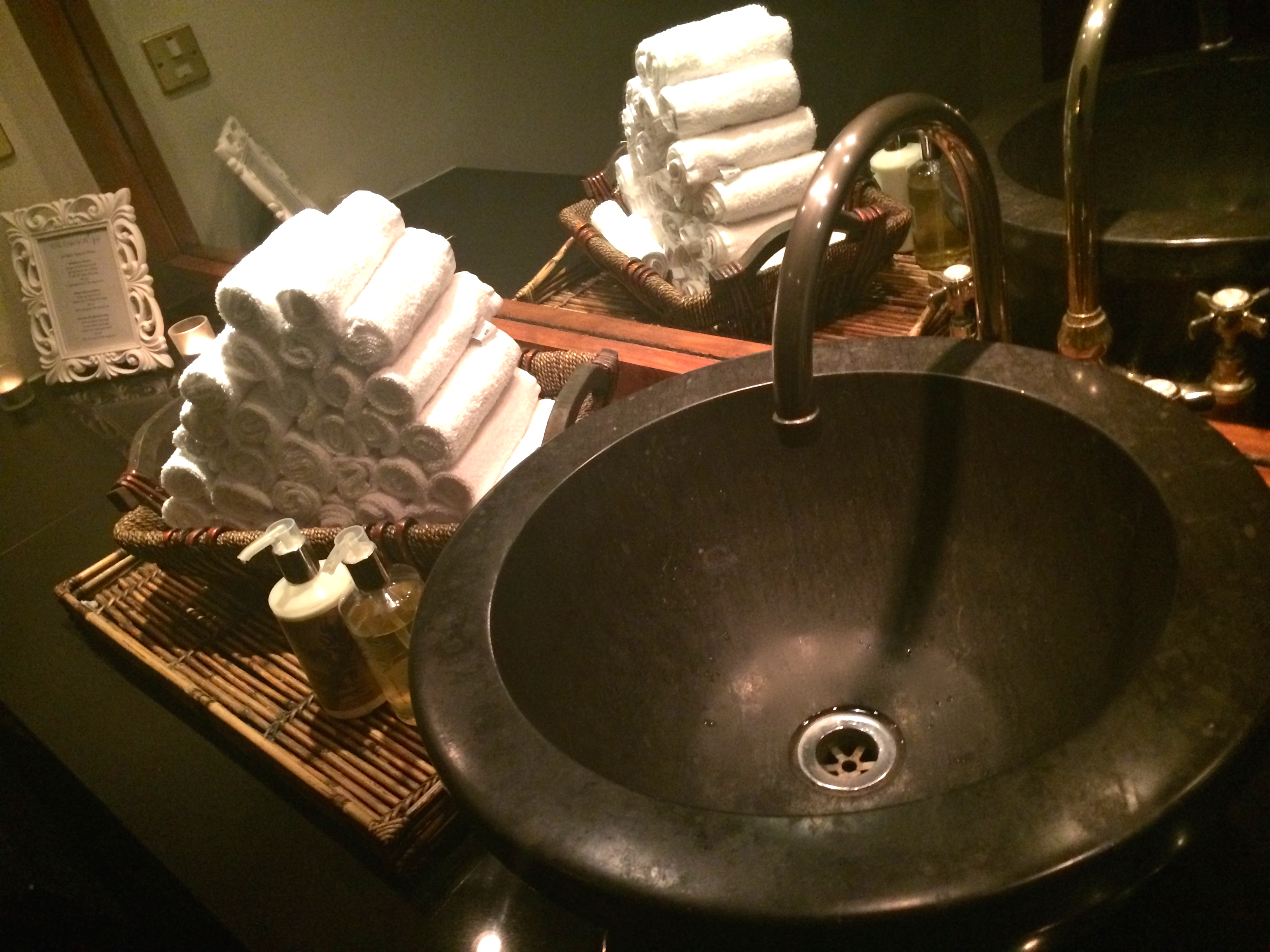 Since returning to work at the beginning of September, my life has been hectic to say the least. It seems like I am constantly chasing my tail and running from one appointment to the next. Thankfully, I am enjoying everything I am doing, but it is very rare that I take a moment to myself and relax. When offered the chance to review one of The Dawson Spa’s new treatments for the up coming Christmas season, I jumped at the chance. This was exactly what I needed. The Dawson Spa is located, in the Dawson hotel on Dawson Street. The Spa itself is located on the top floors of the…

Many of you that know me or  are regular readers of the blog, know I am a fan of the finer things in life. I like to treat myself to little luxuries every so often and indulge in real treats. Last Thursday I was invited to Iconic Beauty salon, for a treatment that I can only describe as out of this world. It was literally like nothing I had experienced before.. Iconic Beauty, is located in Rathgar village in Dublin. It is a quick drive, or bus trip from the city centre and has parking outside. From the moment you walk through the door, this salon screams opulence and luxury.… 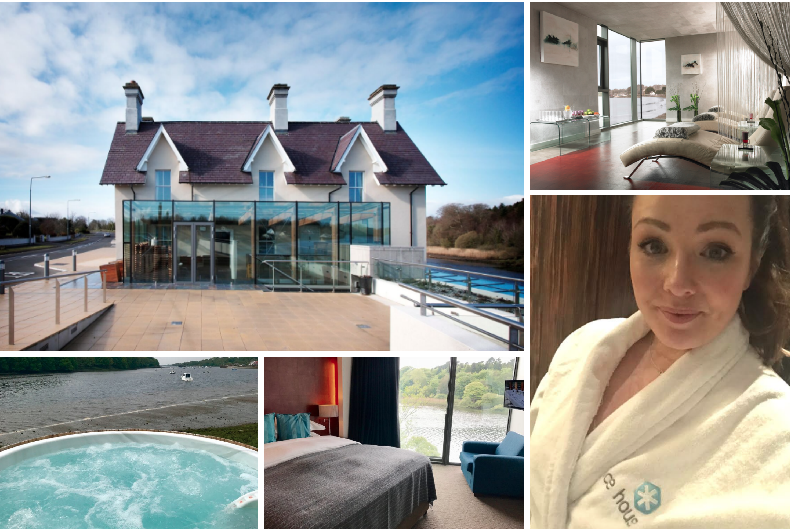 In 2013, as many of you know, I was diagnosed with cancer. It isn’t something I mention all that often on the blog. The Beautiful Truth was started as a distraction from being sick. My blog has always been my escape. My cancer free space. It was and still is my place to talk about stuff that is frivolous and a bit of fun.  Yet, when the Ice House in Ballina contacted me to review their cancer wellness centre, my interest was pipped. This was something I could talk about on the blog and hopefully help someone! When you’ve cancer, it is a time in your life that your energy levels… 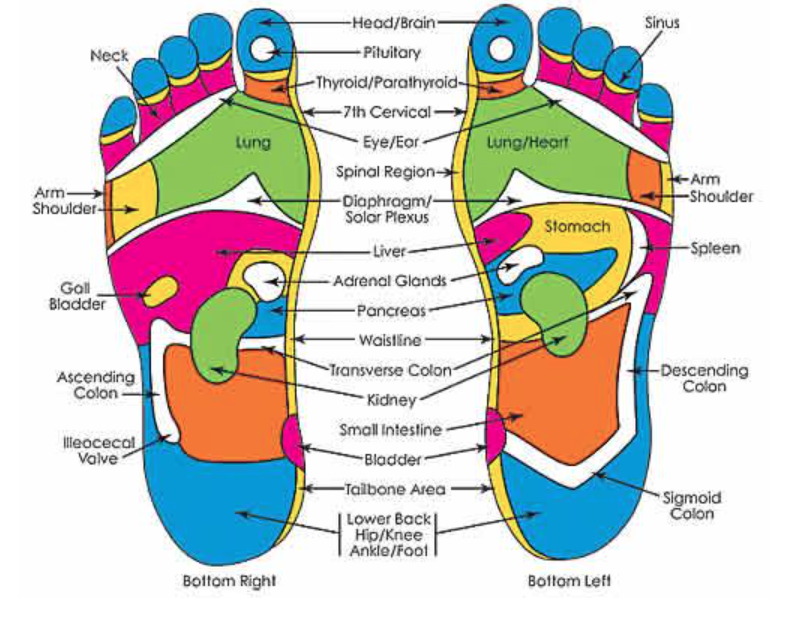 Reflexology at Bella and Me Maynooth

You always know that a treatment is good, when you wake yourself up with your own snoring!! That is exactly what happened to me when I went for reflexology in Bella and Me Beauty salon Maynooth. Thankfully, I was only asleep for a handful of minutes because I really was quite blown away with the reflexology treatment. When I was invited into Bella and Me for a session of reflexology, I really had no idea what I was letting myself in for. I knew that reflexology had something to do with the feet but after that, I was completely at sea about what I should expect. Basically reflexology is a treatment where… 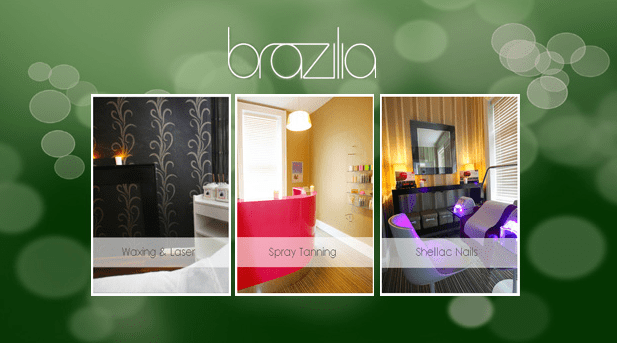 The nervous waxer at Brazilia

Waxing is one of those things most people do, but rarely talk about. I am personally not a waxer, i can count on one hand the amount I’ve had due to the fact I have the most pathetic pain threshold. Add to that, the fact that a few years back I had the most horrendous waxing experience imaginable and you will understand why I tend to be an at home kinda girl. A few years back, I took a notion to start waxing. I bought a Group On voucher and was proud as punch heading off to visit the salon to cash my voucher in. It was not a pleasant experience to… 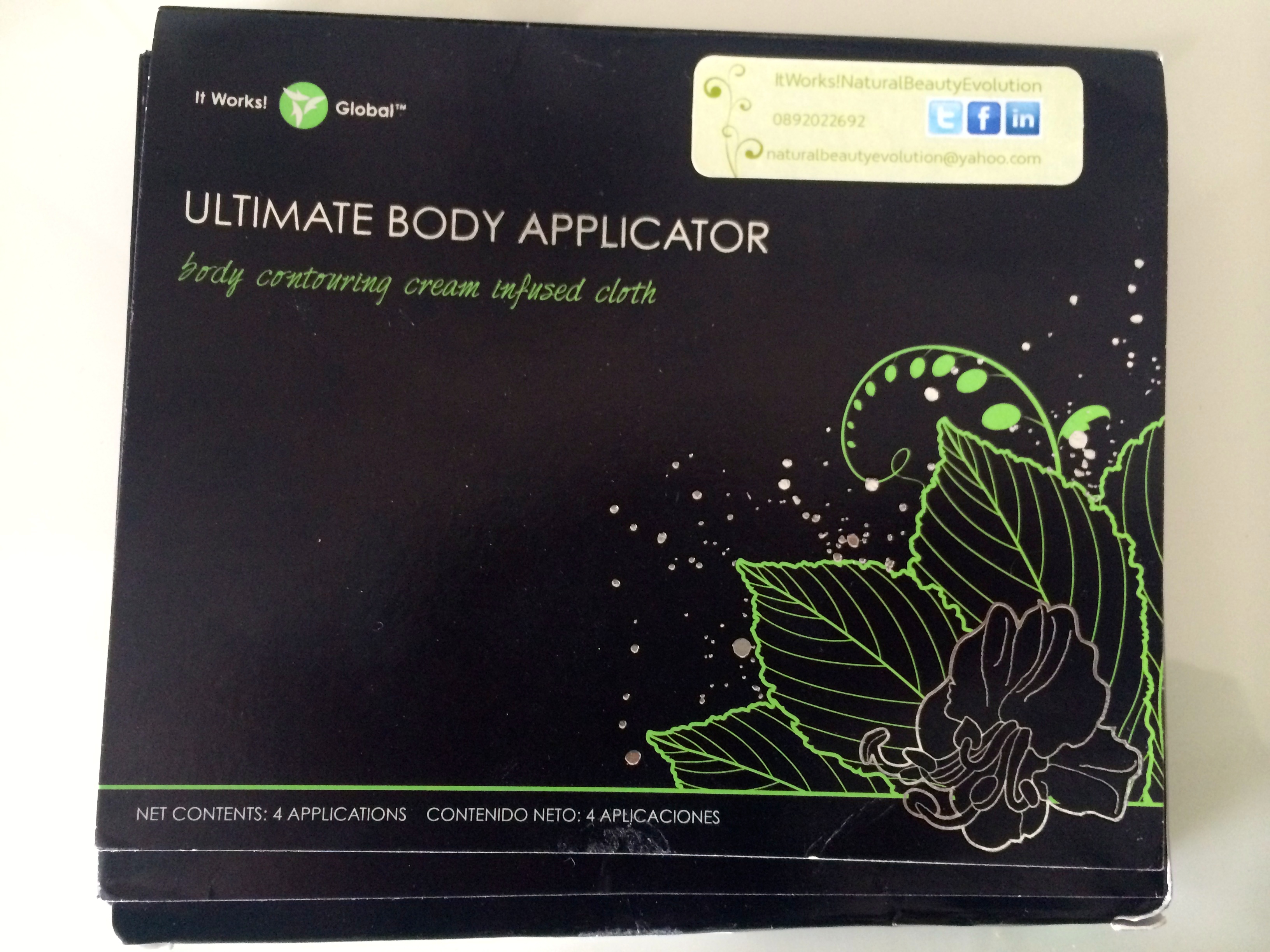 First things first. There is no quick way of getting rid of fat. There is no over night miracle product for getting skinny. I have had to come to terms with the fact that, I didn’t put on weight over night and I know I’m not gonna loose it overnight. The only thing that will help me get to a body shape I am happier with, is diet and exercise. However in saying that, there are little things that can help us out along the way to give us a little boost when we need it. A few months back I was sent a number of products by Amy, from natural beauty… 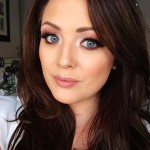